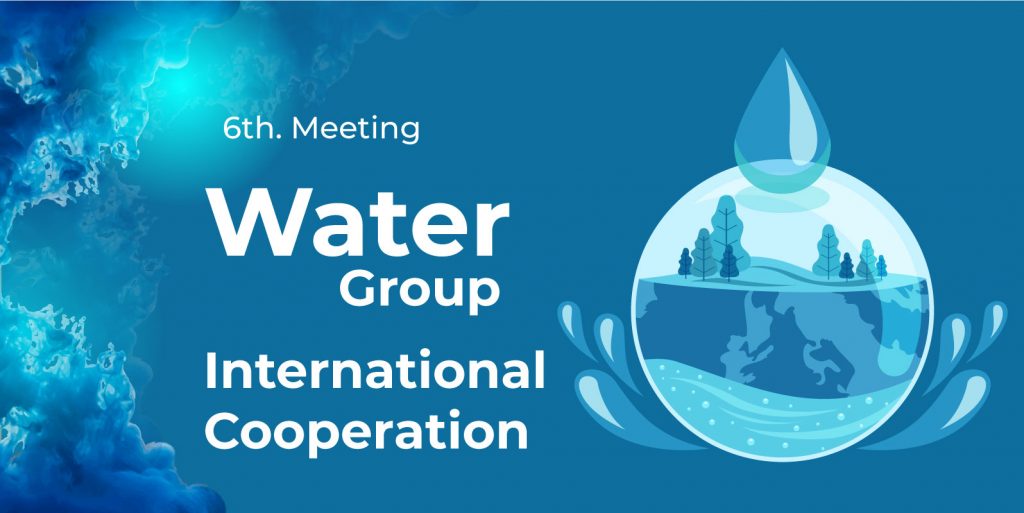 The sixth working meeting of the international cooperation Water Group took place on 10 March. The Deputy Minister of Construction and Sanitation, Javier Hernández Campanella and the director of the Sanitation Department, Max Carbajal attended the meeting, and shared with the group members the progress in the sector, the issues where it requires support, an update of the strategies and activities for formulating the National Sanitation Plan 21-25 and the progress of the matrix of indicators for urban and rural sectors.

The Deputy Minister, Javier Hernandez opened the meeting by highlighting the importance of updating the NSP, and noted that although in a few months the ministry will be handed over to a new administration, the plan will be to establish the important points to be followed and the challenges facing the sector. He explained that the new management will have to consider: i) the sustainability of services and ii) how to close the persisting gap. Both issues are of equal importance and closely related to the issues of poverty and health.

Progress in the National Sanitation Plan 21-25

Max Carbajal, the MVCS Sanitation Department Director said that the ministry is updating the national policy as part of the formulation of government policies using the CEPLAN methodology, and is working to leave the first stage ready to deliver to the next administration. His presentation addressed the progress made in each of the six themes, and he highlighted that all the sector’s activities are aligned with the United Nations’ SDGs and the follow-up to the 2030 Agenda.

He spoke briefly about the new and different alternatives for closing the gaps in sanitation services, stressing the special water supply and wastewater treatment system, a recent government strategy that has resulted in a structural reform of the market design. He also noted that SUNASS has developed its own procedure, of which more will be learnt in the coming months.

The director also said that the department is working on financial sustainability, through re-engineering the Safe Water Investment Fund (FIAS), but noted that little progress has been made. He appealed to international cooperation for support, to resolve the sector’s structural issue with financing investment and because it could ensure equality.

He went on to say that capacity-building for providers is critical for achieving universal access and guaranteeing efficient investments. He highlighted the three diploma courses held with the support of German cooperation on the reuse of wastewater, EPS management in epidemics and pandemics, and a specialisation course in Hydrological Modelling of Surface and Groundwater Resources. He said that the department is now offering an on-line specialisation course in design and management of sanitation sector projects with the support of the French Agency and the National Engineering University, which has attracted both EPS and local and regional governments.

He described the progress in optimising technological solutions, and explained that the department is working on four manuals[1], two are already in the second draft and will be published soon, and the next two are still in course.  In the next few months the department expects to publish the four manuals, which are part of a package of ten manuals, all related to the subject of wastewater. This will be very useful for the EPS and other users.

He also pointed out the commitment to innovation and innovative technologies, and mentioned the consultancy on BES technology (dry toilets) supported by UNICEF, which is at an advanced stage, and will soon be introduced into the regulations and will be implemented quickly. He also emphasised the use of lactose protein and activated carbon technology to remove heavy metals from water, supported by SDC. The preliminary results are now under review and the system is expected to be added to the regulations so that it can be implemented as soon as possible.

He pointed out that with SECOSAN’s support progress has been made in strengthening sector articulation and the sector information system for water and sanitation (SIAS). The department is working with an international consultant to move the system forward from the design to the operational stage, and expects SIAS to have all important sector information and become a key tool for all sanitation services stakeholders.

He mentioned that the department has been monitoring wastewater, in coordination with the National Institute of Health and supported by SECOSAN, as an early warning tool for COVID-19, to identify the genetic material of the virus in wastewater up to two weeks before a patient shows symptoms. In the next few weeks, the department will present the first results of its work with Sedapal in Lima and identify the monitoring points, and the same for Arequipa with Sedapar. He emphasised that this pilot stage has demonstrated that SARCOV2 can be detected in wastewater and can identify the number of replicates or concentration.

He stressed that the 24 regional sanitation plans have made considerable progress. A total of 16 of them have already been completed with the support of the World Bank, of which eight have already been recognised by a Legal Resolution, eight are on the way to achieving the same, while the remaining eight (Puno, Moquegua, Arequipa, Pasco, Huánuco, San Martín, Amazonas and Tumbes) require additional support. This is being negotiated, as the national sanitation plan must be built on the basis of these regional plans.

The director commented on the strategy to improve the appreciation of sanitation services (the sixth theme). The department is conducting studies in the rural and urban sectors (18,000 surveys nationwide) to gather information to formulate a sector strategy for improving the appreciation of the services. It is working with Swiss Cooperation and SECO on two issues: i) how ready consumers are to pay for improvements in sanitation service provision, and ii) what the deciding factors are in consumers’ perception of the value of sanitation services. Surveys are already being conducted in rural areas, and the department has selected the company that will be awarded the service in urban areas, and it will start the study as soon as possible.

Mr. Carbajal mentioned that the department is working with SECOSAN on behavioural economics applied to sanitation services to address the scarcity of natural, economic and technical resources, and that they are very close to launching a pilot project in Lima. They are also working with Water.Org on a communication strategy to support the activities for improving the appreciation of sanitation services.

The department is receiving support from Swiss Cooperation (SDC) and SECO to develop the indicator matrix and guide the new national sanitation plan proposal. The matrix is in line with the six priority themes of the National Sanitation Policy 21-25. This gives priority to the issues in the NSP: to achieve universal access to services that are sustainable over time, in line with the United Nations SDGs and the 2030 Agenda, which Peru has committed to achieve, giving priority to the most vulnerable communities.

The consultant has found the following gaps in the six themes of the NSP: (i) access, (ii) targeting, (iii) quality and (iv) sustainability; which are specifically in line on the first four themes of the NSP: 1. To provide services to the community without access to them, giving priority to the poor; 2. To ensure that providers produce economic resources and use them efficiently; 3. To develop and strengthen providers’ management capacity; and 4. To implement sustainable sanitation projects that are technically, administratively, economically and financially efficient. The last three correspond directly to sustainability, and the first to access, quality and targeting of service provision.

The consultant grouped the leading indicators for measuring the gaps identified in service provision, according to each gap. For Access, he considered i) water service, ii) sewerage service, and iii) investments. For Quality: i) continuity and ii) water quality; for Targeting: i) coverage of low-income community and ii) continuity; and for Sustainability he prioritised i) regulatory, ii) financial and iii) environmental indicators. He mentioned that the Access and Quality indicators would be at the first level and the Targeting and Sustainability indicators would be at a second level.

He also mentioned the importance of identifying those responsible and the roles of those who should monitor that the priority indicators were operated properly; the possible sources of information to be mapped in order to calculate and monitor the leading indicators and the National Sanitation Plan, which will have better feedback when the Water and Sanitation Information System (SIAS) is implemented; and the roadmap to be followed for data collection for indicator calculations.

The consultant said that previously the indicators for the rural sector corresponded to just one theme of the NSP and that there were only three, making it very difficult to measure progress and gaps in this sector. So the six themes of the National Sanitation Plan were used as the framework for this new proposal and for setting the priority of indicators just as in the urban sector, together with certain characteristics necessary for first level indicators: i) up to date data, ii) data that can be monitored, and iii) good quality variables for estimating the indicators.

The priority indicators for theme 5 take into consideration the percentages of: i) subnational financing of investments in rural areas; ii) SUNASS coverage of supervision and oversight; and iii) the number of regions that have multi-sector sanitation platforms for rural areas led by the DRVCS.

Finally, he said that the Appreciation of sanitation services indicators are also being developed, as they depend on the completion of the Perception and Appreciation Study of the service, which is still in course. These indicators consider the percentages of i) the population with a positive perception of water and sanitation services; and ii) the percentage of the population willing to pay for the improved service they receive.

Following the presentations, the cooperation agencies’ representatives made their comments and suggestions regarding the proposals for the indicators. These included the following: that an institutional sustainability indicator would be appropriate due to the high turnover of civil servants in the public sector, besides indicators on the inspection and supervision of providers and institutions; that access per se, security of supply and resilience to extreme events should be included in the policy and national plan; that intercultural guidelines should be incorporated, to facilitate ownership of new technologies and hygiene practices; and finally that gender and quality of service indicators should be included, in line with the SDGs and “leaving no one behind”.

Download here the presentation of the National Sanitation Plan 2021-2025