#FLYINGHOME and Rapid Response to COVID-19: The repatriation of stranded Swiss nationals and Humanitarian Aid in Peru and Latin America 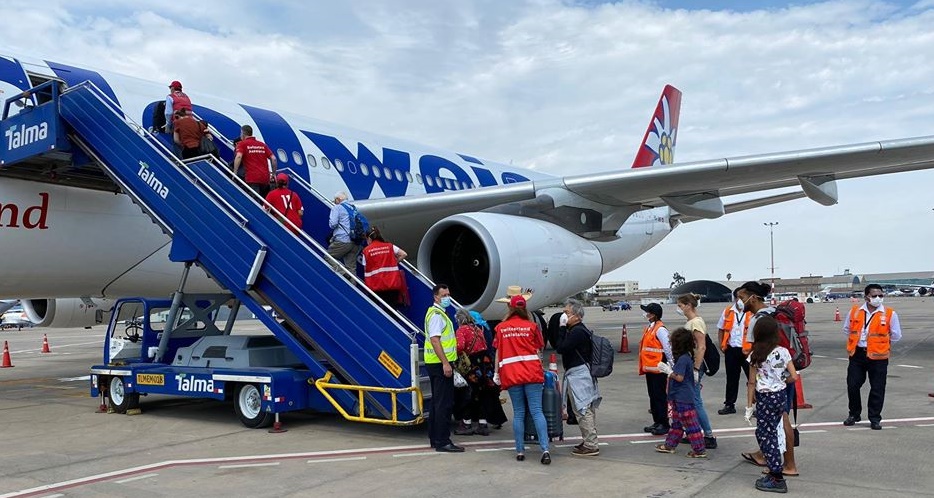 In the face of the COVID-19 global crisis, the Swiss government organised a rapid response through its embassies worldwide to repatriate stranded Swiss nationals with the support of its Humanitarian Aid Programme. In Peru it worked in cooperation with INDECI.

The global crisis caused by COVID-19 is damaging health systems, economies and social systems worldwide. In addition, border closures and flight cancellations directly affected tourists around the world. On 19 March in Switzerland, Foreign Affairs Minister Ignazio Cassis announced in a statement that all Swiss travellers outside the country should return as soon as possible.

On 16 March, President Vizcarra closed Peru’s borders as a state of emergency measure. The Swiss Embassy team in Peru, led by Ambassador Markus-Alexander Antonietti, put all their efforts into their first priority, coordination with the Peruvian government to repatriate Swiss tourists stranded in the various regions of the country.

Three flights were organized to repatriate Swiss tourists from Peru. A total of 830 Swiss and other European nationals left Lima on #Edelweiss planes and returned home on government humanitarian flights, thanks to the coordination of the Swiss Embassy in Peru with Peruvian government authorities.

The embassy organized four convoys of 13 buses that took about 400 Swiss and other European nationals from various cities outside the capital, such as Cusco, Tumbes / Punta Sal, Arequipa and Pucallpa.

Coordination with local authorities, in particular INDECI and other embassies (including Germany, the Netherlands, and France) in order to pool efforts, was key to the successful repatriation of as many Swiss nationals as possible.

The Swiss diplomats organized the transfers throughout Peru, coordinating with Swiss tourists through their social media and providing advice by telephone. Using the “travel admin” app, diplomats registered and took a census of Swiss nationals. By 21 March a total of 7,700 Swiss tourists had been registered around the world and approximately 800 in Peru.

The use of the app for registering Swiss nationals was helpful for organising to collect them from across Peru. Most were tourists. Christoph Sommer, Deputy Head of Mission at the Swiss Embassy in Peru, explains in the following video the coordination for repatriating Swiss tourists from Piura, Trujillo, Ayacucho, Huaraz, Cusco, Arequipa and other places in Peru.

The last convoy of three buses arrived from Pucallpa and Oxapampa on 12 April, with 43 Swiss and other nationals from Belgium, Germany, Spain, France, Norway, United Kingdom and Argentina, all stranded by #COVID19. The third Edelweiss humanitarian flight took a total of 230 Swiss and Europeans home the next day.

In a recent statement to the Swiss public, the President of Switzerland, Simonetta Sommaruga, said: “On behalf of the Federal Council, I appeal to your responsibility: stay at home if you are over 65 or sick. Keep your distance from others. This is how you can help yourself and others.” “When the situation calls for it, we are much more than 26 cantons and 8.5 million inhabitants: we are one country, and we are there for each other,” she concluded.

It is worth mentioning that this was the largest organized repatriation the Swiss government has ever carried out. The Ministry of Foreign Affairs and its embassies in Latin America have supported the return of more than 800 fellow citizens stranded in Peru and the rest of the subcontinent as a result of the coronavirus.

The Swiss Embassy in Peru, through its Ambassador, Markus-Alexander Antonietti, reaffirms its commitment to each and every one of its nationals and has sent a sign of hope and solidarity to the Peruvian people.

The following videos show a little more of all the work involved in rapid response actions.

Once the Swiss nationals were repatriated, SDC began to formulate its regional humanitarian aid in Ecuador, Bolivia and Peru, consulting the main parties active in the crisis to assess the most important needs and contribute to reducing the suffering of the most vulnerable groups, in particular those dependent on the informal sector.

The main lines of action will focus on food security (in homes and shelters), water, sanitation and hygiene (WASH), institutional strengthening for INDECI (coordination, awareness-raising) and support for Venezuelan migrants. SDC plans to contribute 200,000 Swiss francs for the first operation.

In the medium term, it plans to contribute a similar budget to the rehabilitation process.