Within the framework of the Climate Change Management Support Project 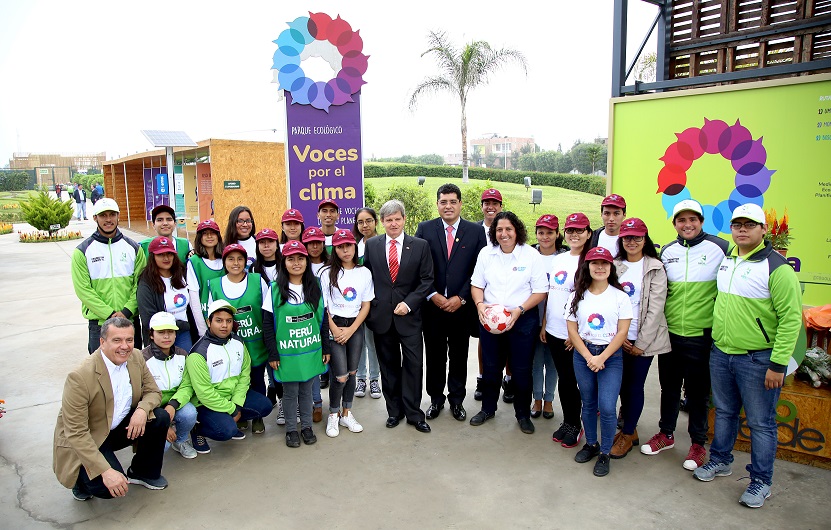 The “Voices for Climate” ecological park was relaunched with the aim of educating, involving and making citizens aware of the fight against climate change.

Within the framework of the World Environment Day, commemorated last June 5th, the Ambassador to Switzerland in Peru Mr.Markus-Alexander Antonietti, took part in the relaunch of the Voices for Climate ecological park, where he emphasized the support Switzerland has been giving to the Peruvian government to face climate change.

“(The environment) is part of our institutional policy, and we expect to accompany the local governments (like Surco) that have bet on such an important environmental issue (as education). We will also seek mechanisms to institutionalize the changes and successful work methods of the local governments so that these will be continued”, pointed out Minister Fabiola Muñoz.

In addition, she mentioned that we must all be involved in caring for the environment. “The environmental subject must move us, pain us, and make us think that we are losing the world’s biodiversity. It is us, people, who put ourselves at risk and are being affected. Consequently, small actions –like residue segregation and reduction– also count (in facing contamination); and we are already witnessing initiatives by restaurants or malls that are, voluntarily, forbidding the use of plastic straws, among others”, she emphasized.

On the other hand, Regional Director for UN Environment, Mr. Leo Heileman, reminded that the theme of the World Environment Day celebration for this year is: Beat Plastic Pollution, because the world is facing a huge plastic contamination problem. “We are producing a huge amount of plastic. Five billion plastic bags are manufactured every year, and one million plastic bottles per minute. A large part of this goes to landfills, but a significant part also goes to the environment. This is why we have the Clean Oceans Program, so as to raise awareness in the world about what is happening, since the oceans are polluted with 13 million tons of plastic every year”, he said.

Mr. Roberto Gómez, Mayor of the District Municipality of Surco, district where the ecological park is located, stated that when he inaugurated the Voices for Climate park the objective was to educate and involve, as well as to raise awareness among citizens about the fight against climate change, and “after three years, 250 thousand people have come visit us, 80% being children and young people”.

The Ambassador to Switzerland in Peru, Mr. Markus-Alexander Antonietti, pointed out that caring for the environment is an important factor between the Swiss Cooperation and Peru. “Recently, Peru passed the Framework Law on Climate Change, and we highlight this job, because it is important to change minds and we are agents of change. We are going to keep working with Peru for a better world”, he added.

About the “Voices for Climate” Ecological Park.
This park is conceptualized based on five subjects that are important for Peru: Forests; Mountains and Water; Oceans; Energy; and Sustainable Cities. Each subject was chosen based on the characteristics and vulnerabilities of the country regarding climate change and taking the international trends into consideration. The pavilions hold interactive modules with scientific contents that tackle the impact caused by climate change and the solution alternatives.

The “Voices for Climate” ecological park is the first theme park on climate change in South America, and now it will show visitors, in its different stands, updated information contents and videos that, playfully and simply, will help them understand the causes and consequences of global warming.

The Contribution of the Swiss Cooperation to Peru
Switzerland was one of the main partners of the Mountain and Water Pavilion of “Voices for Climate” at the COP20 | CMP10 during 2014. Their technical and economic support continued also during the installation of the ecological park in the Municipality of Surco, as a legacy for the climate agenda of Peru. In this context, the Swiss Embassy and the Swiss Agency for Development and Cooperation (SDC) continue to offer their support to promote climate action aiming at the competitive and sustainable development of the country.

In 2017, MINAM (Peruvian Ministry of Environment), together with the Municipality of Surco, and the valuable contribution of the Climate Change Management Support Project –a MINAM initiative funded by the Swiss Agency for Development and Cooperation (SDC)– performed a content update and developed new ludic tools and interactive modules that present the Nationally Determined Contributions, the commitment of the country towards the adaptation and mitigation of climate change.

You can see photos of the event in the following link:

For further information:
Web of the Voices for Climate Ecological Park