United by Water: towards a responsible and committed management of water.

BLUE CERTIFICATE, initiative promoted by the National Water Authority, awards recognition to important companies for their efficient use of water.

The Blue Certificate is a new and original Peruvian initiative in Latin America, which is being awarded since 2016, with the support of the Swiss Cooperation Agency COSUDE that has been working since 2010 in the private sector, aiming at achieving a corporate strategic management of water.

The Ceremony: Water and sustainability took place on November 7, at the residence of the Swiss Ambassador in Peru, Markus-Alexander Antonietti, during which the Blue Certificate was awarded, recognizing good practices by the private companies in the efficient use of water, as well as for their social responsibility actions implemented in water resources management, in the water basins where their production units are located.  This initiative is promoted by the National Water Authority (Autoridad Nacional del Agua – ANA) attached to the Ministry of Agriculture and Irrigation, with the support of the Swiss Embassy / Swiss Agency for Development and Cooperation – COSUDE, through their SuizAgua Andina project.

The Blue Certificate is a new and original Peruvian initiative in Latin America, which is being awarded since 2016, and this year has been awarded to the companies Compañía Eléctrica El Plantanal-CELEPSA, Minera Coimolache (Minas Buenaventura) and Nestlé, who assumed the voluntary commitment to compensate the impacts of water use in the basins of influence of their projects.

The Blue Certificate Awarding Ceremony was celebrated with the presence of the Swiss Ambassador in Perú, Markus-Alexander Antonietti; the Minister of Environment, Fabiola Muñoz; the head of the ANA, Walter Obando, the President of the National Confederation of Private Business Institutions – CONFIEP, Roque Benavides; among other officials and representatives of national business companies.

The Swiss Ambassador in Peru, Markus-Alexander Antonietti stated that the Swiss Government, through the Swiss Agency for Development and Cooperation – COSUDE promotes social responsibiity in the use of water, thus the importance of business integration in the responsible, strategic and corporate management of water.

The Minister of the Environment, Fabiola Muñoz, welcomed the initiative of the Agriculture and Irrigation sector, led by Minister Gustavo Mostajo, who recognized the effort made by the private companies to use the water resource in a sustainable and efficient manner in benefit and protection of the population and our natural water sources.

The head of the ANA, Walter Obando, stated that the most recent Blue Certificate award is a step forward in the public policy of the agriculture sector to promote the efficiency of water management, sustainability of businesses and recognition of the companies that develop good practices in integrated water resources management in the country.

Likewise, Sociedad Minera Cerro Verde obtained a special Blue Certificate in recognition for their contribution in the management of water resources in the Arequipa region. The General Manager, John Cooke Derek, and the Vice-President – Corporate Affairs, Julia Torreblanca, thanked for the award and stated that initiatives like the startup of the treatment plant La Enlozada improve the quality of water in the basin of the Chili River.

The interest of the private sector to join the BLUE CERTIFICATE initiative is increasing. During the ceremony it was announced that Agrícola Cerro Prieto, Camposol, Cite Agroindustrial Ica, Esmeralda Corp, Fenix, Ferreycorp and Southern Perú are in the process of obtaining this recognition.  It is worth noting that Mexichem, Orazul Energy and Unacem are the water responsible companies previously awarded with the Blue Certificated.

We invite you to learn more through the actors responsible for this change.

We share images of the event, a video briefing and a complete video of the entire ceremony. 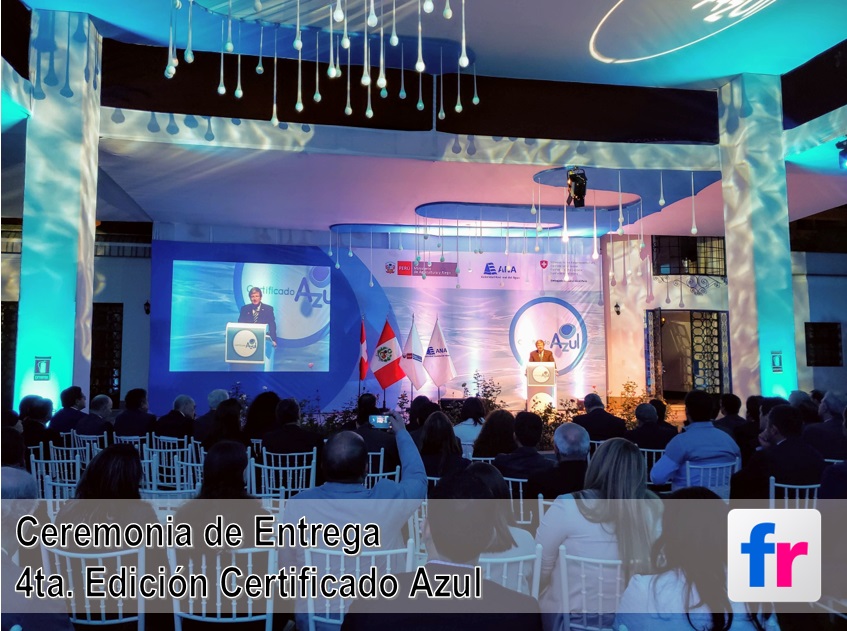 About the Blue Certificate

Any Company complying with the applicable law regarding use of water, may apply for this award. Registration is free and voluntary, users must follow the following steps to participate:

The main benefits obtained by the companies upon being awarded the Blue Certificate are: i) strengthening of business sustainability, ii) competitiveness increase before the State in purchase processes or public tenders, iii) strengthening of the Company image before clients and suppliers, iv) Reduction of operational costs due to water consumption, v)  consolidation of relationship with adjacent communities, among other.