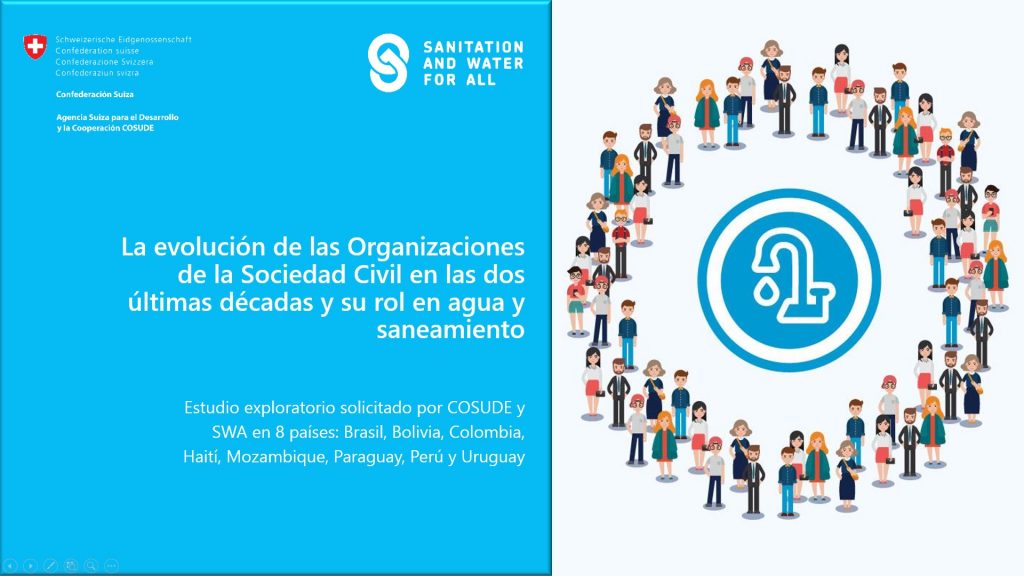 On 22 October, the main findings of the exploratory study requested by SDC and SWA were presented to consultant Ana María Tovar. It was conducted in eight countries: Brazil, Bolivia, Colombia, Haiti, Mozambique, Paraguay, Peru and Uruguay. This was an opportunity for dialogue and for all those involved to build a shared vision for moving closer to the fulfilment of SDG 6 on Water and Sanitation, and for sharing the experiences and contributions to the results of this study.

The webinar was opened by the director of Swiss Cooperation, Martin Jaggi. He said that although SDC has worked hand in hand with the public sector, civil society organizations played a prominent and important role in advocacy. “We have always worked with civil society organizations because they have an extremely important role in innovation and as monitoring (…) they can mobilize States and governments to accelerate progress in closing the gap in rural water and sanitation,” he said.

He mentioned that two months ago he had in his portfolio “the SIRWASH project, a regional programme that we will be implementing in Bolivia, Peru, Colombia, Brazil and Haiti, where the lessons learned from earlier projects in Peru will be scaled up. SDC will work together with government and civil society to assist these countries in closing the gap in water and sanitation access. The study is very important because it will guide us in this new ten-year project” he concluded.

Rosa María Alcayhuamán, SDC national programme officer, said “Swiss cooperation and Sanitation and Water for All are presenting this study together. It was conducted in seven countries in Latin America and one country in Africa and shows the evolution of CSOs over the last two decades. It also provides an insight into their role in the water and sanitation sector. For SDC, the CSOs have played a fundamental and important role in meeting the goals of the SDGs, specifically SDG-6 on water and sanitation and the human right to water and sanitation. “We understand that CSOs make a marked contribution in these aspects, which is why we believe this study to be very important for really knowing about their capacities, their role as facilitators for closing the gaps in the WSS sector, the links they have with levels of government, especially in the area of public policy advocacy, their alliances with the private sector for development projects, but also to know what challenges they face, and which may affect their sustainability”.

The Webinar began with a presentation by Ana María Acevedo, the consultant in charge of the exploratory study, who shared its main findings: “The study of CSOs in eight countries aimed to have a clearer vision of civil society in its role in closing gaps and ‘Leaving no one behind”. It was conducted in Bolivia, Brazil, Colombia, Haiti, Paraguay, Peru and Uruguay, to look at the roles played by CSOs in advancing the commitments of SDG 6 in their countries, their evolution in recent decades, their articulation with their governments, their advocacy capacity and participation in the sector’s decision-making.”

She went on to present the findings in six thematic axes, and the challenges and recommendations.

Below is a brief summary of the presentation’s highlights:

1. Evolution, role and profile of CSOs in the water and sanitation sector in recent decades

The evolution of CSOs in Latin America and Mozambique in recent decades has had diverse characteristics and roles, depending on the political, social and economic situation in their countries. They have emerged at certain moments in history as social movements, often to support democratic processes, from citizen participation to inclusion of disadvantaged groups. They have drawn attention to the failures of the State, and later evolved as partners for development with new alliances and interaction with international cooperation.

2. The contribution of CSOs to closing the gaps in the peri-urban and rural WSS sector

The CSOs studied were NGOs that work in regions with rural areas, where less than 50% of the communities have access to W&S. In Peru, five of the nine NGOs surveyed (56%) work directly in building water and sanitation installations in regions whose households have less access to water and sanitation services. In Paraguay, 80% work in the regions with wider gaps (indigenous populations are also located in these regions). In Mozambique, 42% of the population of Niassa has access to basic water services from dug wells, and approximately 43% of the population has traditional or improved latrines. In Bolivia, 80% of the NGOs surveyed indicate that they help close gaps in coverage. In urban areas, their work is for communities in areas of urban expansion, while in rural areas it is concentrated in very poor sparse communities. In Uruguay, NGOs work in rural areas with low sanitation indicators, estimated at 40%, and put in sanitation systems in rural schools. In Brazil, NGOs are located in the regions with the least access to services.

3. The contribution of CSOs to comprehensive management of water resources and disaster prevention

A total of 51% integrate IWRM through activities and even projects.  Some 40% of CSOs work on issues related to adaptation or mitigation to the effects of climate change. Risk management is still poorly addressed, except in Haiti where NGOs implement structural risk prevention measures, addressing emergency and post-emergency.

4. CSOs and their links with government

5. CSOs and their links with international cooperation and the new global agendas

International cooperation agendas have led the CSOs – and especially NGOs – to develop their technical capacity fast so that their work can achieve the effectiveness which aid donors demand.  They have also shown a great facility to adapt by incorporating new approaches into their commitments and development projects, in the light of the changes in our societies and new economic, social and environmental scenarios. One of the approaches that NGOs and international cooperation have brought to the fore of their work is gender equality, which has become a cross-cutting theme in all work with the community and within organizations. A further issue that is attracting increasing interest is the challenges to be faced by climate change, the conservation of ecosystems, the incorporation of a circular economy, and the defence and protection of citizens’ rights. The   community involved feel ownership of this approach, since they are no longer “beneficiaries” but subjects of rights.

6. New players that engage with CSOs

The private sector is one of the new players with engages with CSOs. Coca Cola invests with AVINA in the recovery of aquifers and the conservation of ecosystems in Peru, Paraguay and Uruguay. In Peru, and Nestlé invests to expand the rehabilitation of water and sanitation services in the scope of its influence. Other examples are EMATER, which implements projects for aquifer and ecosystem conservation in South East Brazil and Northern Uruguay, and the Water Resources Group and Global Compact associations, which promote private sector investment in sustainable water management in Peru, Brazil and Colombia. All of them work in partnership with NGOs and the public sector. Furthermore, all countries have professional associations that contribute to debate, policy analysis and technologies in water and sanitation, and provide data and technical expertise.

The consultant made five recommendations: i) strengthening social capital, which strengthens institutional memory, and promoting partnerships between CSOs, to facilitate dialogue and participation in decision-making; ii) solid stakeholder map; iii) validation, replication and scaling up of good practices; iv) multi-stakeholder platforms where civil society can raise issues and put forward proposals for public policies, to validate models etc.; and v) participation management: it is very important that CSOs know each other, and that government knows who they are and what they do.

The meeting was moderated by Cesarina Quintana, regional coordinator of Sanitation and Water for All (SWA) for Latin America and the Caribbean. She presented the panel of commentators composed of professionals who specialize in civil society, water and sanitation issues. Nathalie Seguin, General Coordinator, Action Network for Water, Mexico; Claudia Zapattini, representative of the Centre for Environmental and Social Studies, Paraguay; Marcelo Encalada, director of LatinWASH, Ecuador; and Jorge Rochabrunt, deputy manager of Inter-institutional Coordination, Peru.

Nathalie Seguin, general coordinator of Action Network for Water, Mexico, emphasized the roles of CSOs, saying they were very diverse. She highlighted the importance of scalability, pointing out that this must be systematised in order to close gaps, or else there will be just isolated projects which will not help close gaps.

Claudia Zapattini, representing the Centre for Environmental and Social Studies, Paraguay, addressed transparency and corruption, which are major issues in Latin America, and the fundamental role of CSOs in this area. She highlighted the issue of governance and facilitation in multi-stakeholder platforms, which must be enhanced and strengthened if they are to be more effective. She underlined the contribution of CSOs to public policies on water and sanitation, in developing trust and building capacity, as more than simply investment in infrastructure is needed.  There must be transparency and improved service quality to achieve sustainability.

Marcelo Encalada, director of LatinWASH (Ecuador), centred his comments on community organizations, focusing on grassroots community organizations, which are very important for drinking water and sanitation services in the Latin American region. He also emphasized the importance of networks and the silent and unpaid work of the people who operate water and sanitation systems. He highlighted the importance of sharing experience, knowledge and learning, where LatinWASH has an important role as a multi-stakeholder platform.

Finally, Jorge Rochabrunt, deputy manager of Inter-institutional Coordination, Peru, stressed the importance of having a development agenda with a systemic vision, which is familiar with the different levels of actors and the multi-stakeholder platforms at different levels of government to facilitate synergies between different agencies and sectors. He pointed out that corruption continues to be a problem that is very hard to overcome, and which is unfortunately deeply-rooted in Latin America.