With the support of SDC and Nestlé Peru, AQUAFONDO presents the study “Water crisis, a silent threat to economic development” 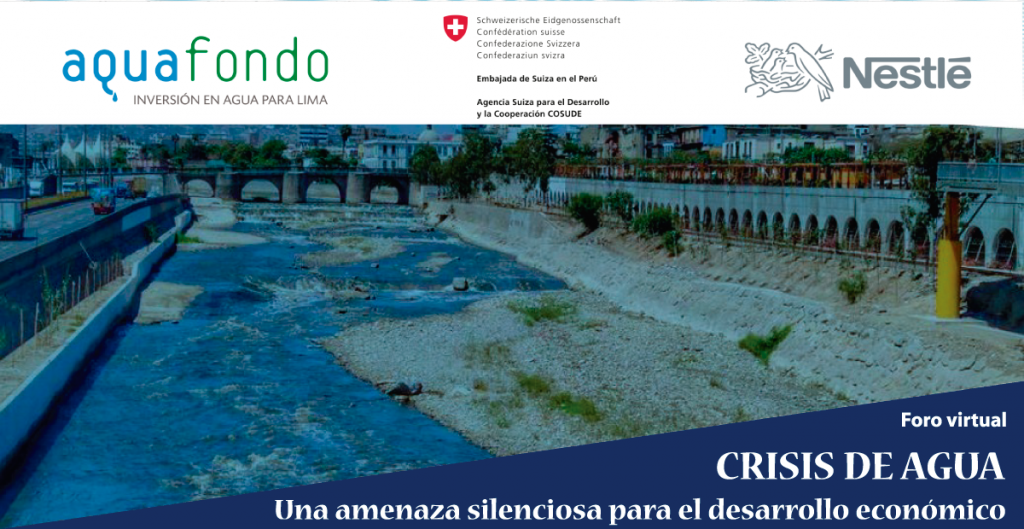 The study was presented on line on June 12, with a panel of specialists. Over 650 people were connected. The publication is part of the joint work by AQUAFONDO, Swiss Cooperation (SDC) and Nestlé Peru, and was carried out by the Grupo de Análisis para el Desarrollo (GRADE)

In 2016, with the contribution of German Cooperation, Aquafondo conducted the study “Water risks for the private sector in Metropolitan Lima”, which became an important instrument for raising awareness about the use and industrial consumption of water.

The study was updated in 2019, with the support of Swiss Cooperation SDC, through its Disaster Risk Management and Humanitarian Aid programme, and Nestlé Peru. It addressed new challenges and took into account the disasters caused by the El Niño Coastal Phenomenon, and also incorporated the seismic risk component.

The event was opened by Amarildo Fernández, head of the National Water Authority, who highlighted “This Water Crisis Study will serve as a basis for proposing strategies for improving water resource management in the river basins. It also provides clear evidence of economic, social and environmental factors, given the present health situation. We need to have inventories, the information basic to decision-making”.

SDC Director Martin Jaggi said “It was important for Switzerland to support this update, as we have been working on corporate water management issues for many years. Switzerland depends a lot on water imports, almost 80 per cent of our water footprint is imported, and hence for us it is crucial that water beyond our borders is better managed. This is similarly true here for the Rimac River basin, which serves both agricultural and industrial production”.

He went on to say that for two years SDC has been working on disaster risk management. This programme has analysed scenarios following a major earthquake in Lima, which would entail the immediate collapse of the systems, making it impossible to provide drinking water and sanitation in Lima and Callao. SDC is therefore coordinating with SEDAPAL and the Ministry of Housing on initiatives for providing a parallel drinking water and sanitation system for the communities that would be affected.

This was followed by a presentation by Eduardo Zegarra, a researcher at GRADE, who described the main results of the study. He indicated that with the 30 per cent drop in drinking water availability following one of these natural phenomena, it would be unlikely that this resource could be provided for 10.5 million people, and production would suffer. The economic sectors that face serious water risk are food, beverages, textiles, metals and oil, and trade and education. “Lima’s total production would fall to -2.22 per cent, and employment could see over 35,000 jobs lost (16.2 thousand in these sectors)”, he said.

The city of Lima has 10.5 million inhabitants and produces 44 per cent of Peru’s GDP. It faces significant risks that could impact the normal water supply used in production. The greatest of these are related to major earthquakes, and climate phenomena that significantly alter water availability (drought and floods).

The study aims to identify the water risk levels faced by companies in Lima, with reference to production, supply source and location in the city. Water risk is two-fold: (i) the degree of dependence on water use in a context of growing water scarcity and volatility; and (ii) the economic value generated.

In addition, this study also presents a quantification of the potential impacts of a water crisis (significant reduction in supply) on economic variables such as the value of production and employment in the city, important factors and variables for both the public and private sectors to incorporate into their management plans.

It is important to emphasize that the draft document for the OECD “Water Governance in Peru”, promoted by MINAM, contemplates all the risks taken into consideration in the study and were highlighted at the event. It also recognizes the urgent need to promote multi-sector dialogue regarding the proper management of ecosystems, which are part of the process of ensuring the sufficient water quantity and quality in the long term.

In closing, Alonso Vásquez, president of Aquafondo’s Board of Directors, said: “The message is very clear, we have an increasingly restricted water supply and growing demand, an equation that is not sustainable. How much do we, as private enterprise, consider the water variable in management plans? Like Aquafondo, we have a role as a link between the public and private sectors for facilitating projects and actions that will provide us with greater water security in Lima”.

The following link shows the videos of the presentations and the panel with questions to the experts who presented the study.